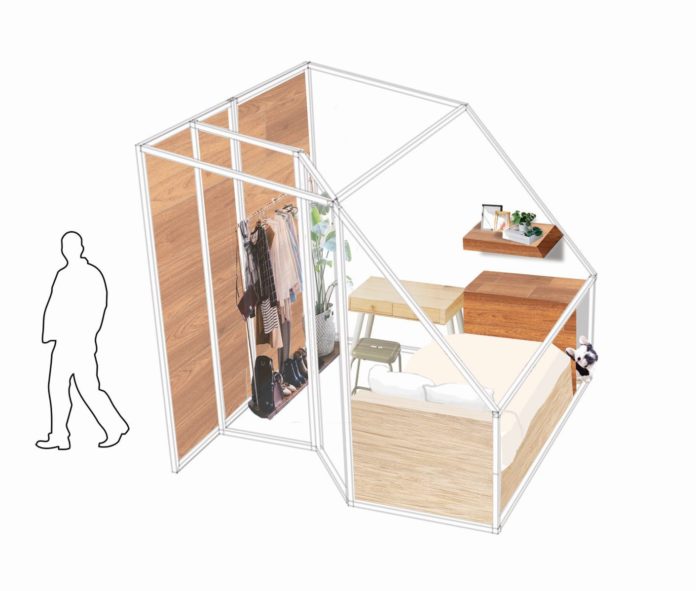 When journalists and the general public talk about the housing crisis in California, they’re actually referring to one of several interconnected problems facing Californians of different income brackets.

Rent continues to rise, and a substantial number of Californians spend more than half of their monthly income on rent, which, for obvious reasons, makes it more difficult to cover other basic expenses or save money over time.

However, an even more visible aspect of the housing crisis, and one that is related to several other systemic issues, is homelessness.

A January 2020 count (i.e. pre-COVID) found that there had been a substantial rise in the number of people experiencing homelessness, both in the city of Los Angeles and the greater Los Angeles area.

Since then, Los Angeles has continued to struggle with widespread homeless encampments, which can very commonly be found on sidewalks in busy neighborhoods, on beaches, and under freeway overpasses.

Early this month, LA passed a measure designed to limit homeless encampments throughout the city, but enforcement of these kinds of measures remains difficult.

To put it bluntly, homelessness continues to be a serious problem in the United States and doubly (maybe triply) so for California.

Potential wide-scale solutions have been the subject of both professional and private conversation for years, and in 2018, the mayor of LA was looking to low-cost, convenient temporary housing as a potential means of improvement.

One proposal for this type of housing is the topic of today’s discussion:a prototype project called the Pop Hut.

The Pop Hut: a small solution to a big problem

Here’s how the Pop Hut project came about.

In 2018, Eric Garcetti, Mayor of the city of Los Angeles, sought guidance from multiple architecture and design schools with regard to designing new bridge housing. Bridge housing is a term referring to temporary shelter for people experiencing homelessness.

Studying at ArtCenter Pasadena at the time, Jayati Sinha joined the project, which was led by Professor James Meraz.

“I joined as an Environment Designer. This project was extraordinary and very attractive to me because it was directly transferable to any country in the world that faces some version of homelessness. My hope was to inspire people in India to bring change through this emergency temporary housing initiative.”

Today, Sinha, an in-demand designer, will walk us through the major features of the Pop Hut and the design process of the project.

Sinha previously worked on the Environment Design team at Fuseproject, a design firm headed up by Yves Béhar, and currently, she’s working as a physical and digital experience designer at Fjord.

Sinha feels very strongly about taking a design approach that’s based on a true understanding of real people and what brings joy to their lives. It’s human-centered design in its truest form.

The Pop Hut project turned out to be a perfect opportunity for her to apply this design approach to a serious real-world problem.

On the subject of panels

When taking a look at the finished Pop Hut prototype, one of the most striking design features is the prominent use of translucent panels that supplement the more frequent opaque panels.

In some places, this translucency serves as a kind of window but without including a traditional glass window, which could be easily damaged or even become a safety hazard in certain instances. 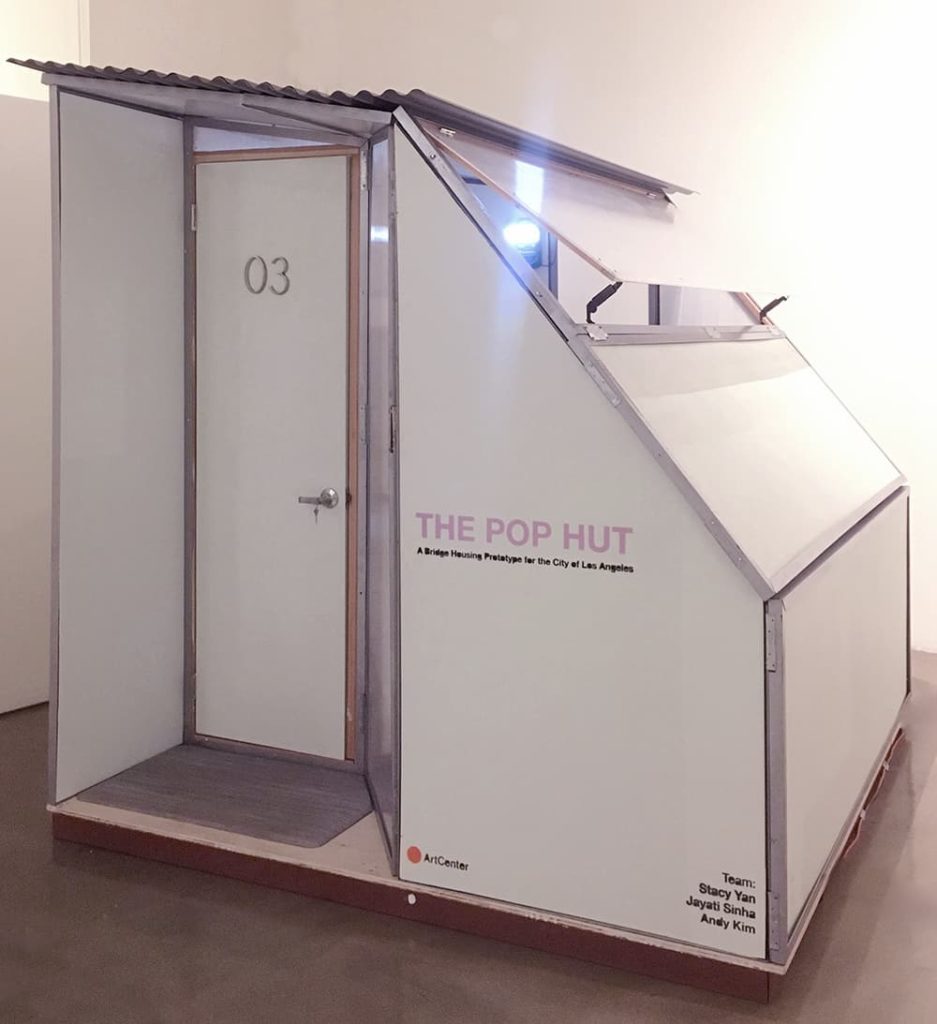 Translucent panels in other locations also bring additional natural light to the interior.

Sinha explains that the coloring and materials of these translucent panels served vital functions for this structure.

“We used the translucent materials as therapeutic tools to make residents feel secure, and we used pastel colors to create a calming experience. The material brought this beautiful filtered light inside the home without removing too much privacy. The interiors also had some open shelving so that the user can customize it with their personal aesthetic to make it feel like home.”

That opportunity for personalization is especially important for a housing structure that is designed to be mass-produced.

No one wants to feel that they’re living in a generic housing space, so giving residents the chance to make this space their own, even in a small way, can make that space so much more appealing.

Also, generally speaking, when people feel a sense of ownership over the houses, apartments, and communities where they live, they’re more likely to be motivated to keep these areas safe and lively.

This concept is substantiated in Jane Jacobs’s seminal work on city planning, The Death and Life of Great American Cities.

One of the guiding principles for the entire bridge housing initiative is that the housing structures needed to be relatively affordable to produce en masse to meet demand.

Obviously, this ability to meet demand was the main priority here, but the Pop Hut housing prototype was also meant to be arranged in small communities, rather than as distant, separated individual units.

Sinha details how this project contributes to building communities, not just isolated structures.

“Our intention was for people to be able to make friends and create their own community. People who have not had a home for a while crave this sense of belonging. These houses can be combined together to create a shared space with a canopy. It can also help in bringing back a sense of having neighbors to mingle and make new memories with.”

Community creation and community health are large topics that have been discussed and debated for many years, but it’s easy to see how these structures could foster a sense of community life wherever they’re placed.

It’s interesting to think about how housing designs themselves can help people feel comfortable reaching out to neighbors and forming bonds, even those as simple as greeting each other each morning.

Even a simple add-on feature like the shared canopy could serve as sufficient motivation to have two or more of these structures placed in close proximity.

What starts out as a purely practical motivation could easily lead to deeper, more personal connections.

Based on the original prompt for the creation of the Pop Hut prototype, the cost of bringing this design to life was a major point of focus.

Because this type of housing was meant to potentially serve thousands of people, it had to be relatively affordable to produce.

In terms of square footage and silhouette, there’s a temptation to compare the Pop Hut to the so-called tiny homes that have attracted a great deal of media coverage and general interest over the last several years.

But as Sinha made a point of specifying, the two housing types are actually quite distinct from one another.

To start, the Pop Hut is much smaller than most tiny homes, and, more to the point, are much cheaper to produce.

“The total footprint of the Pop Hut is 5 m2. So this is an ideal solution for temporary housing to be provided at construction sites, defense installations, and even for slum dwellers. Pop Hut was built for about $2,000, a price which could be reduced if manufactured in bulk and using lower-cost materials. Things like weather and surroundings can affect the choice of materials, too.” 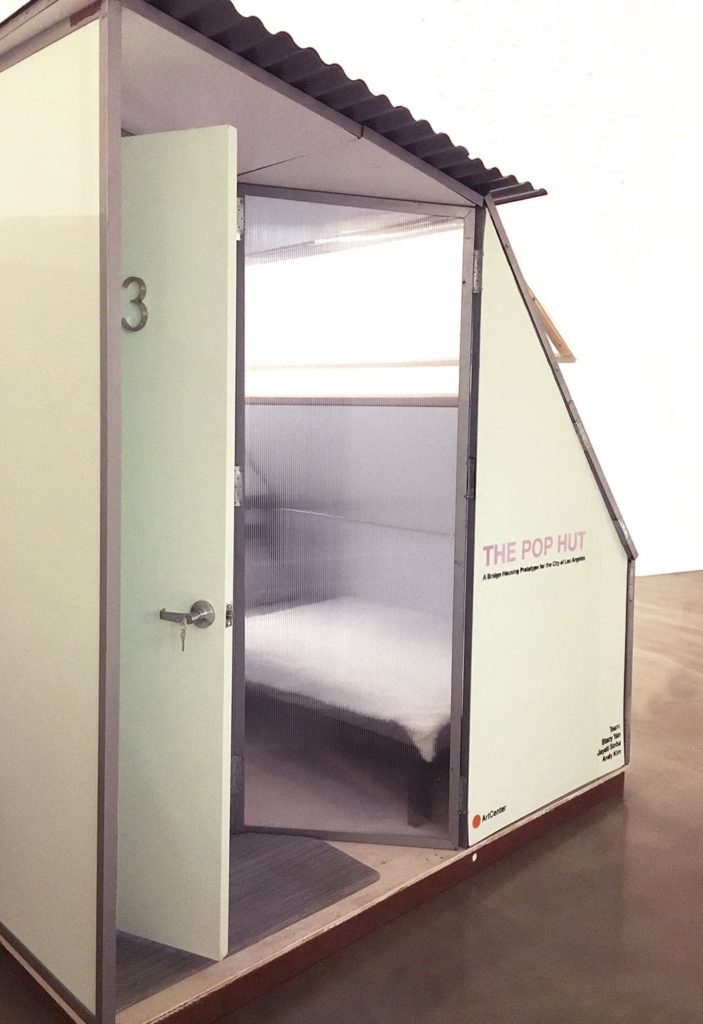 Considering that the average monthly rent of a studio apartment in the city of Los Angeles is just under $2,000, paying roughly the same amount to build a Pop Hut to provide basic housing for a vulnerable person doesn’t seem very substantial at all.

By the time the Pop Hut prototype was ready to be shown off, Sinha was confident in the overall design as well as the execution of that design.

One thing that the Pop Hut makes very clear is that it was designed with real people in mind. Unlike certain other prototypes that surface from the design world, this prototype doesn’t give off a sense of the designers’ ego.

Each individual design choice is there specifically to serve the person using it. It serves a basic function while also including small touches that can make all the difference to someone who will interact with it on a regular basis.

As Sinha explains, the Pop Hut prototype received a great deal of praise when it was officially displayed.

“Because our concept was based on empathy and creating a welcoming space, it received very positive feedback. The use of colors, transparencies, personalized interiors, and the entrance canopy made people feel welcome and helped them understand our underlying concept and story.”

The Pop Hunt was not sent into production, but even now it stands as a viable option for temporary housing where needed. We wouldn’t be surprised at the slightest if it leads to similar iterations in other locations where temporary housing of this kind is needed.

All images of Pop Hut provided courtesy of Sinha’s website.