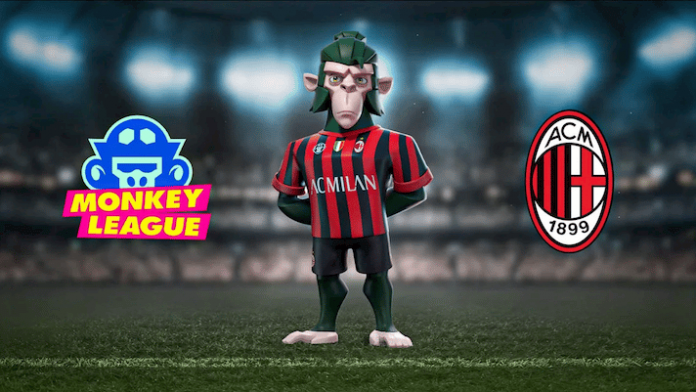 The non-fungible token (NFT)-backed play to earn game has been successfully launched by the Italian professional soccer team AC Milan in collaboration with the Solana, California, esports organization MonkeyLeague.

As part of the new relationship, AC Milan plans to develop wearables, unique game tournaments, co-marketing events, and a variety of other intriguing activities, such as letting club players test the game. These exclusive Rossoneri-branded NFT game assets will be created exclusively for AC Milan.

Along with launching new collections of tokenized, branded AC Milan NFT game assets, such as new MonkeyPlayers, skins, and stadiums, the Italian Champions will also collaborate closely with MomkeyLeague.

In addition, the fantasy football game platform will start its first MonkeyPlayer NFT breeding season, where digital goods with the AC Milan logo may appear at random via breeding. There will be more NFTs, including digital stadiums and real estate.

The Italian soccer team wants to provide its customers with a more exciting online experience. AC Milan’s chief revenue officer, Casper Stylsvig, made the following statement on the most recent collaboration:

“We are thrilled to kick off this partnership with MonkeyLeague, a collaboration that allows us to strengthen our positioning in the field of digital innovation. We are particularly proud to be the first football club to partner with MonkeyLeague, bringing this game to our supporters around the world and offering them a new innovative way to engage with their favorite team.”

The NFT collection is not the only one that AC Milan has released. The Italian soccer champions unveiled their NFT campaign and fan token on the Socios.com fan interaction and reward app in January of last year.

A month later, AC Milan joined together with cryptocurrency exchange Binance and offered its fan tokens on the platform. The team and Onefootball signed a new agreement earlier this year to provide official video highlights.

At the time, crypto aficionados and football fans could collect, exchange, and play with digital cards with the AC Milan logo thanks to a fantasy football game developed by Onefootball and AC Milan using NFT.

The collaboration with MonkeyLeague will bring together the top players from all around the globe to compete in fiercely competitive matches, with the victors earning special incentives. The much awaited game will reportedly be on sale next month, according to AC Milan.

Another play-to-earn game tied to NFT and the metaverse is called Tamadoge, and it will debut the following month. The native token, TAMA, of Tamadoge, a virtual pet game with a dog meme theme, will soon be listed on well-known cryptocurrency exchanges.